Welcome. My name is Sensei Rich Smith and I have been training traditional Japanese Martial Arts for almost 40 years.

I created this website to share what I have learned over the last four decades training traditional  Japanese Martial Arts.

Here you will find video courses that teach you traditional Japanese Martial Arts right from beginner through to black belt.

My first Ju-Jitsu instructor was S.A. Elliott from the Derbyshire Ju-jitsu Academy.  It was through S.A. Elliot that I came in touch with the nunchaku for the first time in the early ’90s.

Later I studied under the late Soke Robert Clark 9th Dan and Technical Officer of the World Ju-Jitsu Federation in Liverpool.

I was fortunate to be one of five private Black Belt students who had the honor of attending the 2-hour advanced training sessions with Soke Clark every Tuesday for 11 years.

In 2001 I set off on my own Musha Shugyo, "Warrior pilgrimage", traveling and training throughout Europe.

During this trip, I visited the Nunchaku International Academy in Switzerland where I met Sensei Marc Brémart 7th Dan.

He introduced me to Sport Nunchaku.

I loved the art and was able to stay and train by sleeping inside the dojo. The training was long and arduous, often 4+ hours a day, fighting without any protection like chest-protector or headgear. It was Brutal!

Between 2003-2004 I went back to Switzerland for more training and in 2005 I made the switch from Kobudo to Sport Nunchaku. The same year I brought Sport Nunchaku to the UK.

Competition took me to places all over the world including Switzerland, France, Latvia, Holland, and even Russia! More details can be found on the site snuk.org.uk - FB Page – Instagram

In October 2018 in Switzerland, I placed second in the world in Sport Nunchaku.

At this world-class event, I was also the national coach for Team GB and in total brought back 17 medals for the United Kingdom.

And at the recent 2019 World Championship tournament in Paris, I became the U.K.’S First World Nunchaku Champion and won three medals

Currently, I'm working on setting up the world Nunchaku championship for September 2020 which will be either in London or Liverpool.

I'm also looking to bring sports nunchaku to martial artists of all styles by developing an online program, which allows people to learn nunchaku skills on their mobile device or computer. 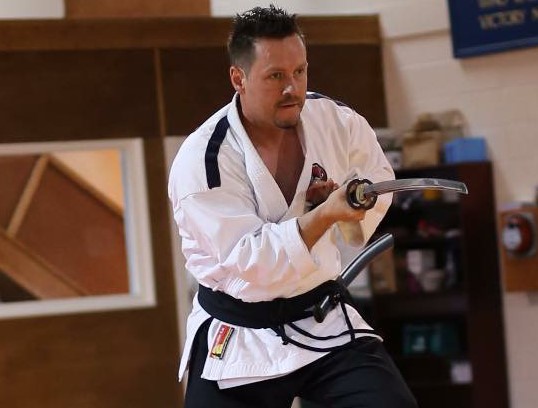